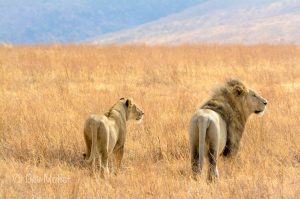 A drive of about 4 hours from the Namanga border between Kenya and Tanzania takes you to the rim of the Ngorongoro Crater. Stopping at the lookout about 15 minutes after driving through the gate to this famous crater, we were thrilled to see right across the crater to the other side. In the distance we could spot herds of animals wandering the plains surrounded by the crater rim, we bubbled with excitement and anticipation of the next two days exploring the crater 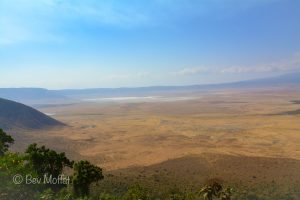 Our game viewing over the next two days was totally fascinating. We had barely arrived on the crater floor before coming across 4 lionesses resting under a tree, looking “oh, so bored” and weary. On the ridge behind them was a dazzle of zebras, and very dazzling display they made in front of a stormy looking sky. What a great start! Our viewing for the day included hundreds of crowned cranes and a magnificent black rhino, which had a large injury on its right front shoulder. Game rangers kept in close proximity to ensure its safety and protect its vulnerability. Several birds of prey and flocks of vultures entertained us along with beautiful water birds and a lone flamingo grooming itself right next to the road.

A beautiful pair of lions crossed the road in front of us, so absolutely regal and totally oblivious of us. Arriving at a pool containing several hippos huddled together, we spotted three hyenas chasing a wildebeest in the background. They eventually brought it down in the hollow of a stream, where several buffalo were about to cross. The jittery buffalo moved further downstream, but eventually came back and crossed just past the spot where the hyenas were feasting, keeping a wary eye on them. As if from nowhere, several additional hyenas appeared on the scene trying to get in on the kill. No such luck – they were chased off, but kept hanging around hopefully. 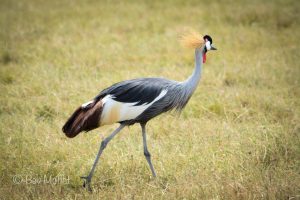 Our lodge provided a daily picnic for lunch, which we had at a picnic site near a dam with a plethora of other visitors to the crater. Entertainment was provided by a number of the picnickers sitting under a tree, constantly being dive-bombed by some of the local bird life trying to pick up an easy morsel or two. On the other side of the dam several elephants were wading through the marshes, whilst in front of us hippos in the dam were keeping us entertained with their cavorting. The afternoon passed quickly with sightings of stunning birdlife, golden jackals, hartebeest, zebras, Thomson’s gazelles and more hyenas. Sunset was on the way as we made our way slowly back to the gate, coming across the 4 lionesses we had seen first thing in the morning, this time enjoying a feast.

The second day brought some more amazing sights: a tawny eagle catching and flying off with a bright green snake in its beak, a family of elephants feasting on a tree they had brought down over the road in front of us and a massive herd of buffalo moving across the plains. The highlight was watching the interactions of 2 lions, several hyenas and a jackal, taking place over a kill. The lions were feasting, the jackal kept sneaking up to pinch a piece, getting snarled at and chased off by the lions. It would manage to snag a piece, only to have it stolen by one of the hyenas. The story would then start all over again and kept us entertained for more than an hour, with one of the hyenas eventually managing to grab a large bone and go running off with the rest of the hyenas in hot pursuit! Each day brought such varied experiences, with no two sightings the same at this stunning Unesco World Heritage site, a two day visit more than worthwhile for us. 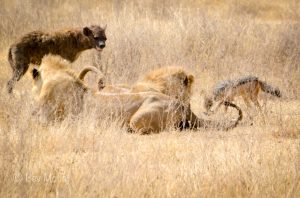 2016 Safari in East Africa – a busy day in Nairobi
Comment 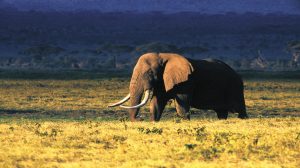 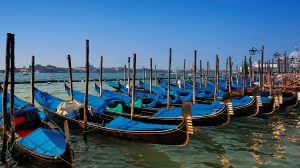 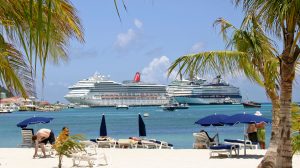 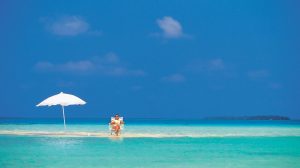